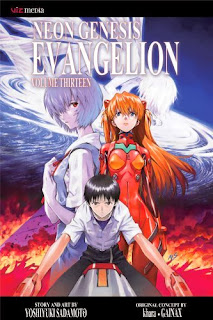 "The world hangs in the balance as Asuka fights to survive an onslaught of Evas determined to destroy her. Shinji rushes to help, but he may be too late. Deep inside the NERV command center, Dr. Ikari is about to set in motion the last act of the Instrumentality Project. Everything has gone according to Ikari's plans so far, but even he cannot foresee the role Shinji will play in determining the future!"

This is the penultimate volume of this series and what a fast, page-turning whirlwind of a read.  Entirely dramatic and unpredictable events and no one comes out of this unharmed!  Frankly, we lose some major characters, but that comes as no shock as it's been happening all along in this series.  No one is safe!  I haven't watched the anime so I have no comparisons to make.  But I'm utterly fascinated with where this story is going to end.  Rei is probably my most favourite manga character ever and I can't wait for the final volume to come out.  This volume though is all action right from the beginning.  It's not heavy on text and actually has many wordless (except FX) scenes as battle is at an optimum here.  Great cliff-hanger ending.  Vol. 14 was published in Japan this year, Jun. 2013, but so far there is no release date for the English edition.  I'm hoping we don't have to wait too long!
Labels: 2012 5* manga post-apocalyptic robots science fiction T+ viz media YA