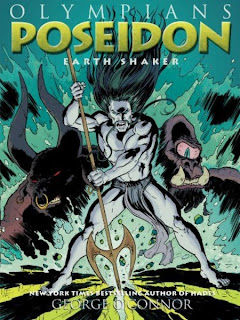 "In the fifth installment of the Olympians series of graphic novels, author/artist George O'Connor turns the spotlight on that most mysterious and misunderstood of the Greek gods, Poseidon: Earth Shaker. Thrill to such famous myths as Theseus and the Minotaur, Odysseus and Polyphemus, and the founding of Athens—and learn how the tempestuous Poseidon became the King of the Seas."


The most stunning feature of this volume is the art.  Of course, every book in this series contains great artwork but O'Connor really outdid himself with Poseidon and probably because story was lacking here.  Not O'Connor's fault, since Poseidon does not have many stories in which he features as the main character but rather appears very often in tales concerning other popular heroes and gods.  For this reason O'Connor changes tune with this volume and has Poseidon telling us his story in the first person.  We see how Poseidon is connected to Medusa, Odysseus, Theseus, Minotaur and others.  Enjoyable storytelling but not as good as the previous volumes simply because Poseidon does not excite us the same way the other gods' story's do.  While I've read countless retellings of Homer and didn't expect to learn anything new in this brief adaptation, I was particularly delighted with the artwork and the unique depiction of the cyclops. Not the best one, but still an enjoyable book in the series.  The back cover tells us the next volume will feature Aphrodite! I can't wait!