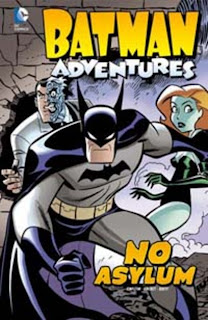 "The busiest day of Batman's life begins as someone breaks into Arkham Asylum, intent on hunting down everyone from The Joker to Poison Ivy. Batman must protect and recapture his biggest foes all at the same time — even though he's just been outlawed by Gotham City's new mayor!"


Based on the TV Cartoon.  This volume starts with Penguin having been elected mayor and having it in for Batman.  When trouble goes down at Arkham Asylum we are in for a ton of fun as numerous Batman villains make an appearance such as: Poison Ivy, Killer Croc, Two-Face, The Joker, Harley Quinn and more.   Finishes with a short story. A riot of fun! Great start to a publisher's new series. 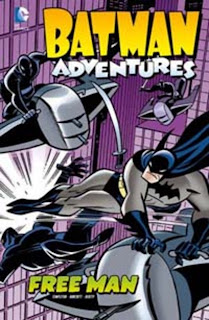 "Hunted mercilessly by shadow assassins, The Riddler turns to Batman for help — but even a Riddler on good behavior can’t resist playing games with the Dark Knight."

Continuing the story started in the previous volume, this one concentrates on the Society going after The Riddler who is currently out of prison and "cured".  Batman helps him out but doubts his cure.  Finished with a short story about Batman and The Penguin mayor.  Another fun story though nothing out of the ordinary.