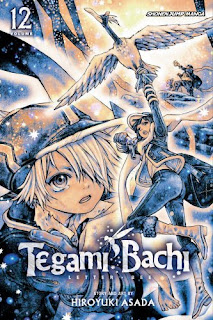 "As the ferocious Gaichuu Cabernet closes in on the capital of Amberground, the Letter Bees form an army to stop it. Lag is paired off with a novice Bee who informs him that he’s become a legend in the Beehive. But Lag’s reputation as the “Child of Light” won’t do him much good against the terrifying power of Cabernet…or the dark secret he’s discovered about his hero, Gauche Suede."


At this point, vol. 12, in a series my reviews can't not but contain a spoiler or two.  This is an intense volume and we are on the verge of the series taking a different direction in its plot, even though at this point we still do have some plot points hanging.  Gauche/Noir has taken off. Largo Lloyd has arrived at Reverse. A new letter bee is introduced in an epic way.  A major battle that has been building up has been fought. But as everything comes to a conclusion things twist and we're not sure where things stand.  Secrets are promised to be revealed in the next volume.  I really enjoy this series; it's one of my favourites that I'm reading but at this point I'm feeling like we need some forward motion.  The secrets of the sun, Reverse and the government need to be reveled and the ultimate quest started.  I just hope this isn't going to be one of those 30+ vol. series; I like closure.