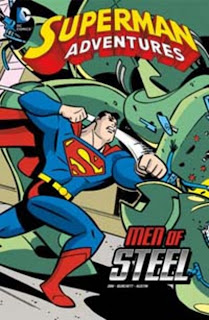 "Angry over Superman's destruction of his Lex Skel 5000 battle suit, Luthor creates a Superman android to take his revenge on the real Man of Steel."

Based on the TV cartoon. Superman is new in town and still an unknown quantity.  Luthor wants rid of him for destroying one of his 'bots so he sets out to discredit Superman.  Lots of action and it's always fun to see Superman fighting a double of himself.  Some of the panels were too heavily inked but overall a fun new start to Superman. 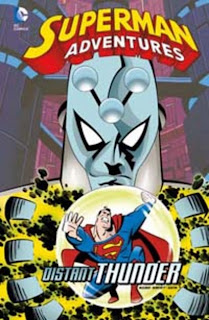 "As the light from the explosion that destroyed Krypton reaches Earth, the humanoid supercomputer Brainiac sets out make sure he's the only possessor of Kryptonian knowledge by destroying Superman!"

Continuing on with stories of an early Superman where no one knows who he is.  Here he remembers the destruction of his home planet and how he came to Earth.  Brainiac escapes and demands the orb containing the Krypton memories.  He attacks with cat robots that can merge and morph into giant cat robots.  Lots of action and Superman fights to save the day. Not crazy about Burchett's art on this series but great story.