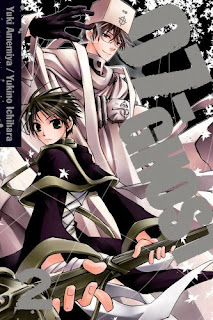 "In a gambit to steal the power of the Eye of Mikael, a force that has helped the Seven Ghosts keep evil at bay for centuries, the Barsburg Empire sends a most unlikely pursuer to the Barsburg Church after Teito—his best friend Mikage."

I'm finding this story hard to get into.  The plot is somewhat scattered; things happen and seem to drift off.  I'm not really sure where the bad guys are coming from or why.  However, I like the characters.  The two Bishops are a lot of fun and their bickering with each other makes them my favourite, even above the main characters.  Teito is interesting as well and I like him; he;s real having both fear and attitude.  I'm going to give this series one more volume to see if it hooks me as I'm intrigued.  But if volume 3 doesn't get the plot onto more of an even keel for me, I'll put the series aside as not my thing. 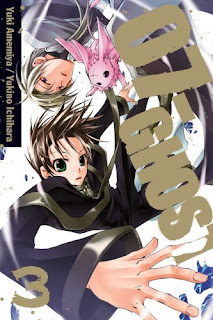 "While Teito trains rigorously to pass the Bishop Examination and gain worldwide travel privileges, a crime perpetrated by one of Ayanami’s henchmen rocks the Barsburg Church. When Frau is framed, can Teito put aside his quest for answers to save the one person who has shown him the true meaning of sanctuary?"

This is where the story really picks up!  I found this volume to be fast paced and I got a handle on both the characters and the plot.  Time is spent here also giving us some much needed background on various major characters which really pulled things together for me and I found myself enjoying the story to such an extent that I'm actually eager to read the next volume at this point.  I still find the battle scenes a little confusing but they tend to be explained *after* they are completed.  This book was very much character driven and focused on the various friendships that have developed.  I agree with the publisher's Teen 13+ rating but not because of violence, there isn't any beyond battle scenes that aren't graphic in the remotest, but more because of the use of profanities (mostly d*mn & b*st*rd).  I'm definitely going to continue on with volume 4!