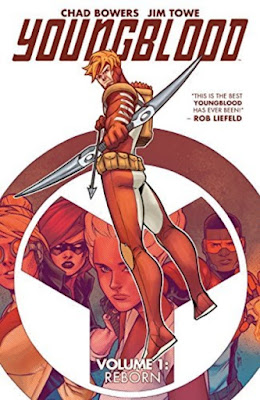 Youngblood Volume 1: Reborn by Chad Bowers
My rating: 5 of 5 stars

I really enjoyed this fresh new superhero team story. Apparently, it is a reboot of a previous series from years ago, which I had never heard of. However, this first in the new series does an excellent job of explaining the backstory and establishing the new team. It is much an origin story and pre-cursor to a larger series. I found it a fresh take on heroes and the book not so subtly threw out a few nods and smirks to DC, which was fun. A new group of young superheroes decides to take over the former exiled-in-disgrace hero team "Youngbloods". When the "old" bloods find out, not all are very happy and everybody gets involved in a techno-thriller, saving the world (for now) by the end.