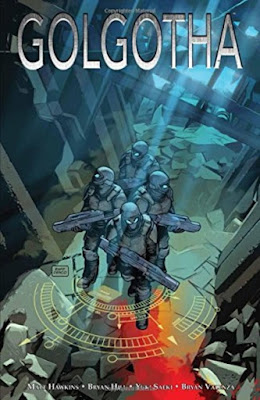 Golgotha by Matt Hawkins
My rating: 3 of 5 stars

A typical space plot of a crew leaving earth in cryogenic sleep and arriving on a new planet to set up as a mining colony eighty years later. Things don't go the way they should though and when they arrive they find a later, more advanced, ship has arrived before them making themselves ancient curiosities. The problem with this volume is that it is very much an opening story to a much different idea and it feels as if it is hurrying to get this origin story over with. The story goes way too fast and there are major plot holes as events are quickly skimmed over. The book ends with the revelation of the big secret and the beginning of what feels to be the story proper. While I found this volume weak I would like to go on with it and see how it plays out.