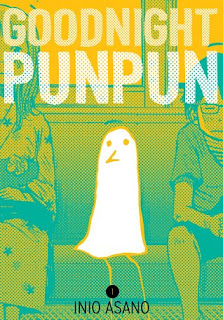 by Inio Asano
My rating: 3 of 5 stars

I don't know. I was expecting something racier for a start. This is an angst-ridden coming of age story that takes Punpun through approx. two years of his life starting with his father nearly killing his mother in a domestic dispute, spending time with his uncle while father is in jail and mother in hospital, his sexual awareness, first wet dream, first girlfriend, usual kid experiences and some not-so-usual weird experiences along the way. Pretty deep with a lot of existential thinking. I think I liked it but the fact that Punpun was drawn as a cartoon character (a bird?) and didn't even speak for the first two/thirds of the book really played havoc with my taking the work seriously. Punpun's entire family is portrayed as bird's but the rest of them speak properly. I don't know. I'm prepared to read the next volume and will see if it manages to hook me or not.