I've been on vacation for the past week visiting my son in Kitchener/Waterloo. Managed to get lots of reading done while he was at work but not up to writing reviews so will be putting together one post of (mostly) mini-reviews to both of my blogs. 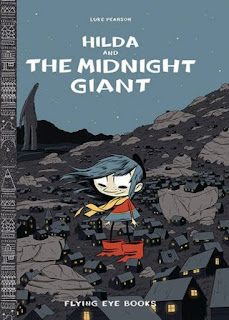 Hilda and the Midnight Giant

Wonderful second book in this original fairy tale series. Hilda finds out her forest is inhabited by both little folk and giants putting herself in the perspective of both as well. While trying to solve the problem she is causing the little people who have let themselves become visible to her she meets the last of the old giants who has come looking for his friend who had promised to meet him here four thousand years ago. Wonderful characters and story. A pure delight to read! An interesting end which makes us wonder what is in store for Hilda and her mother in the next book. 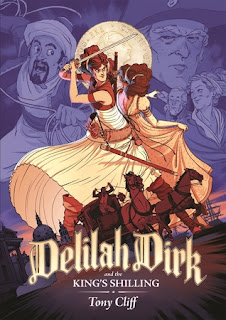 Delilah Dirk and the King's Shilling

by Tony Cliff
My rating: 5 of 5 stars

Fantastic sequel in the Delilah Dirk series! I think I enjoyed this even more than the first! Very much an Indiana Jones-type adventure with a female lead. Set on the continent in the 19th century when England and France were at war, this has a more intelligent plot than these action/adventure romps usually have and makes for an engrossing read. Plenty of derring-do and humour. 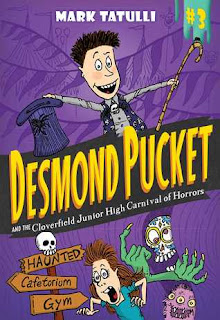 Desmond Pucket and the Cloverfield Junior High Carnival of Horrors

by Mark Tatulli
My rating: 4 of 5 stars

I don't usually jump into a series on the third book but this looked like a lot of fun and I hadn't heard of it before this. It's a hybrid cross between chapter book and graphic novel. Written in chapters, illustrated with comic strips and whole graphic novel sections. Early on there is a graphic section that explains what has happened in the series so far so I had no trouble jumping in at this point. I really enjoyed the book. Desmond likes scaring people and he has a collection of monster props procured from the last book.The book is all monster/scary themed but it's not paranormal at all, just realistic (though far-fetched) day in the life of a grade 7 student. Fun characters, fun situations, silly without any toilet humour I think this is a cut-above the usual fair and I'll probably go back and read the first two before the next book comes out.