Lafcadio Hearn's "The Faceless Ghost" and Other Macabre Tales from Japan: A Graphic Novel by Sean Michael Wilson 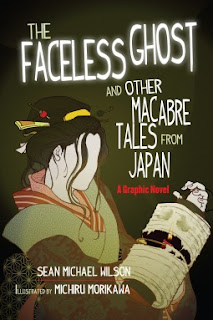 Lafcadio Hearn's "The Faceless Ghost" and Other Macabre Tales from Japan: A Graphic Novel


I'm not a big fan of Lafcadio Hearn, a Victorian Gothic writer who translated Japanese tales of the macabre at the turn of the 20th century. I always doubt whether Hearn was true to his sources as his tales of demons, spirits and yokai are so much more gentle than folktales I've become familiarized with through massive amounts of manga. However, these are slightly strange tales, a little odd, hardly macabre, but pleasant enough reading for a slight shiver. The art is much more satisfying and well done.