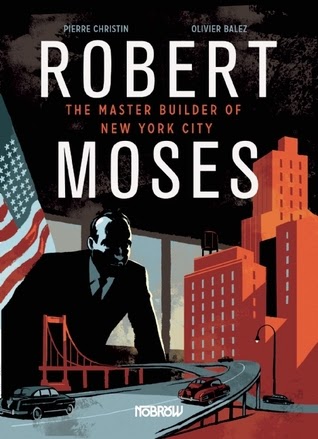 Robert Moses: The Master Builder of New York City by Pierre Christin
My rating: 3 of 5 stars

What a horrid, horrible man! I knew nothing of Robert Moses but chose to read this book because I like graphic biographies and am much interested in architecture. I found out Moses was an urban developer who shaped New York in the early 20th century. He built Shea Stadium, the UN Headquarters, Lincoln Center and the New York Coliseum as well as many beaches, parkways, pools, playgrounds, tunnels, expressways, parks and bridges. But he was a tyrant of a man. He hated the bourgeois rich and didn't even consider the poor at all. Ripping down grand buildings and slums and tenements with equal vigour, displacing the poor, especially visible minorities, to make roads. He spoke for the middle class and yet thought them useless. This book portrays Robert Moses as a socialist of the worst kind, one who uses "the people" for his own power, under the guise of creating a utopia *for* the people. I'm not too keen on the art presented here which reminded me of sixties cartooning in non-fiction resources such as cookbooks and how-to texts. The book was not what I had expected, but it did prove interesting. I'm sure it would be most appreciated by New Yorkers or those who actually know who Robert Moses was.