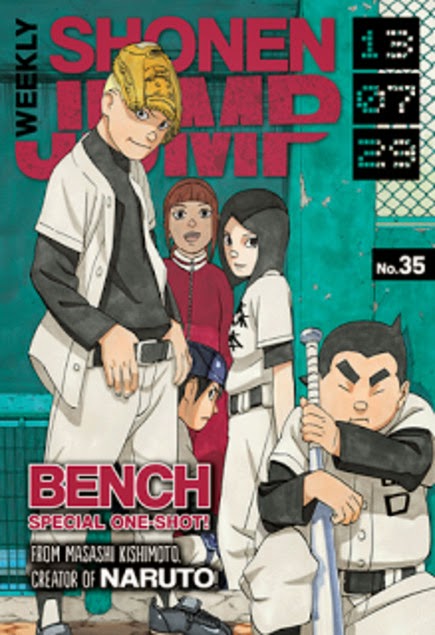 One Piece has taken the week off and Bleach is on hiatus. But this issue starts with a one-shot by Naruto's author. From the on-going weeklies I've settled into my favourites, still have a couple I can't figure out what's going on and only really dislike Nisekoi because it is too shoujo for me (though I'll admit it's a well-told tale)

1. Bench by Masashi Kishimoto (One Shot) - I didn't think I was going to like a baseball story and it did start off rather typical but then a surprise happened and I ended up really liking this story about the "D"-team who proves they are better than just running errands for the other teams. by the author of Naruto (4/5)

3. One-Punch Man Punch 22 - Oh this is sooo good! I love this! One punch gets heckled by a couple of other heroes who want him gone so they insite the community into thinking that if One Punch destroyed the meteor then One Punch is responsible for the damage the meteor's debris caused to the city. But instead of the riot and execution they had hoped for, One-Punch talks back. Fun! (5/5)

4. Jaco The Galactic Patrolman Ch. 3 - Fun. The plot moves along with Jaco's problem of being stranded. Omori does research on the rocket to see if he can analyze the metal and if it is something that can be found on earth. Meanwhile Jaco amuses himself on the island with target practice with boulders and watching TV, a rocket launching and a pop idol performing. The ending gives our guys new hope. (3/5)

5. World Trigger Ch. 24 - Another of my favourites. Starts off with the members receiving the top three rankings from the training done in the last chapter. Now the team of our main characters has a mission, to find a dangerous "Black Trigger" and secure him by any means. They discuss when they will set the plan in motion. It ends on a cliffhanger note. (4/5)

6. Nisekoi Ch. 84 - Continuing romance from a boy's point of view. The lovely teacher announced last chapter she was getting married and leaving the school. Shu finally admits to Raku that he has a crush on her. yadda-yadda-yadda. I don't like romances but it's ok, not eye-rolling or anything. (3/5)

7. Toriko Gourmet 243 - The battle continues with the one wrapped in black but they stop for conversation and Jiro gives a knocking so hard that the earth's rotation stops. At the end our mysterious person's wrappings come off and we are to be surprised at who it really is. Of course, this is only my 3rd chapter reading this so I haven't a clue at this point. This is pretty good and I'm getting more into it as I read it. (3/5)

8. Dragon Ball Saiyan Saga Ch. 25 - The battle with Vegatta and Nappa continues but they give a 3-hour reprieve to wait and see if Son Goku will turn up. Gorgeous in full colour! (4/5)