The Flintstones, Vol. 1 by Mark Russell 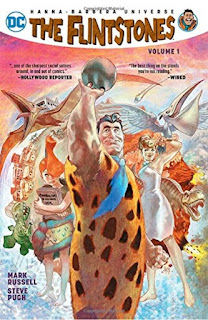 The Flintstones, Vol. 1 by Mark Russell
My rating: 4 of 5 stars

I thought this was pretty good. I loved the art which kept the reimagined characters recognisable but gave them an edge. The characters all had the same personalities as the originals as well, which made them familiar even though they are all more cynical than the cartoon. But being aimed at adults, that's the point. I had expected it to be funny, which it wasn't. There is no plot but rather simply a collection of episodes. Social commentary on today's society is done through parody which leans to the political left, but then so do all DC titles. I enjoyed the modern play on names such as Starbricks. Overall, I'd classify this as a slice of life comic with characters adults will love because they grew up with them as kids. I think my review feels tempered but all in all, I enjoyed the title and will be reading Vol. 2 which I have already pre-ordered.