The Castoffs, V.1: Mage Against the Machine by M.K. Reed & Brian Smith 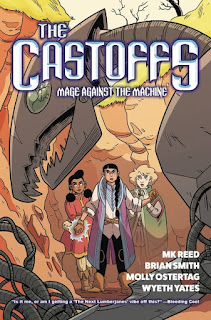 The Castoffs, V.1: Mage Against the Machine by M.K. Reed & Brian Smith
My rating: 4 of 5 stars

An excellent tale for middle schoolers. My initial impression was wariness as the blurb on the front compares it to "The Lumberjanes", of which I'm not a fan. But it's nothing like the aforementioned, except it deals with girls who bond. This is a post-apocalyptic world where robots tried to take over and a war with the magic-users ended in a stalemate. People are forgetting their memories in a town and the Mage's Guild sends out three apprentices: a warrior, a healer and a scout. They've never met before and don't like each other but they bond during their mission. I really liked the characters and a lot of emphases was given to develop real identities for them. The individual mission was completed but an overall bigger plot is left hanging making the reader look forward to the next volume.