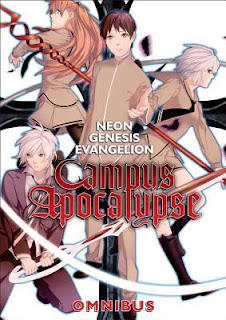 by Mingming
My rating: 3 of 5 stars

Collects all 4 volumes of this mini-series spin-off. A nice omnibus edition with colour pages at the beginning of each volume and paper a bit nicer than what you find in viz's omnibus editions. I've read the original Evangelion series, but am not a super fan or anything like that so can't really go in-depth about characters, etc. However, this is a very different take on the series and is set prior to the original series and basically takes a completely different spin on the story It's still science fiction but no giant mecha fighting machines. Shinji and Kaworu are the main character emphasis and the story is based on "angels" (the enemy) inhabiting human bodies. I really enjoyed the story though I found at points it seemed to have continuity problems. It was fun to revisit all the characters even if they were presented differently, they still had the same basic personalities. While this is still a serious story, it is certainly much lighter than the immensely heavy original series. I don't watch anime so am only speaking from a reader's pov, but I found this a worthwhile read and entertaining reimagining of the series.