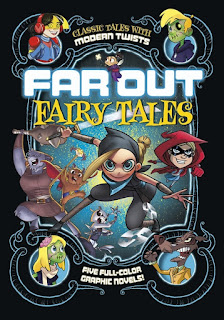 edited by Sean Tulien
My rating: 4 of 5 stars

An omnibus collection of five previously published graphic novel retellings of fairytales by Capstone. These are wild, silly "far out" pastiches and written by familiar names who often write for Capstone. I was thrilled to find "Oddly Normal" author Otis Frampton among those names but his ended up not being my favourite, that honour goes to "Super Billy Goats Gruff" by Sean Tulien. The art is superb throughout and while a few different artists' work appears it is mostly cohesive together, only one did not suit my tastes. Overall, an excellent collection for fairy tale enthusiasts. Also, each story ends with a page of text telling the original story and it's history and is followed by a graphic visual of the changes between the original and the "Far Out" version.

1. Ninja-rella by Joey Comeau (Omar Lozano) - The art is wonderful. It's very angular, bold and colourful! The story is very similar to the Perrault tale we are all familiar with few exceptions but the theme. Cinderella is into being a ninja and changes her name after her mum dies. She practices all the time with a glass Katana sword. After being orphaned the steps treat her as we expect but the story changes when Ninja-rella dreams of going to the ball so she can meet the prince and become his personal bodyguard! Thankfully, her Godninja shows up just in time. Cute! (4/5)

2. Red Riding Hood, Superhero by Otis Frampton - I was thrilled to see this comic by the author of the "Oddly Normal" series. Of course, the art is great and there are lots of funny moments of dialogue. This retelling totally refreshes the original. The only basic element the same is in which Red named Ruby, is on her way to see her Granny and intercepted by the Big Bad Wolf. However, BBW is out to kidnap Granny who just happens to be the President of the United States. The story is full of action as she takes on Professor Grimm, a man who was bitten by a radioactive wolf, now a werewolf. We even get a flasback to Riding Hood's origin story of her superpowers which reside in the cape/hood and it's pretty cute. Another fun tale for the intended audience. (4/5)

3. Super Billy Goats Gruff by Sean Tulien (Fernando Cano) - This one is hilarious. Only slightly keeps some basic elements of the original tale. The three goats set off over the hill to find some grass to eat and end up eating three strange shaped mushrooms which zap them straight into a video game. All the essential video game tropes ensue including fighting level bosses until they beat the creature on the bridge and return to their own world. Another example of wonderful art similar in style to the previous stories. My favourite so far. (5/5)

4. Snow White and the Seven Robots by Louise Simonson (Jimena Sanchez) - Overall, this is the best written story in the book but my least favourite art. The style is completely different, which makes it stand out in a collection like this and it just doesn't do anything for me. The story, however, is well-told and the most entertaining here. It stays very close to the original tale, without much deviation except it has been set in outer space on an alien planet, Techworld. Also, it's not Snow's beauty which causes envy but her intelligence. I really enjoyed this one! (5/5)

5. Hansel & Gretel & Zombies by Benjamin Harper (Fernando Cano) - This is just silly. It doesn't follow the original story much as you would probably expect, what with everybody being zombies. However, all the plot points are there: being lost in the forest, the candy house, Hansel being plumped up, etc. It has a nice happy ending for everybody including the witch. My least favourite story in the collection but the art is by the same artist as the "Billy Goats" story so it is good. (3/5)