Capstone's newest addition to their DC Super Hero Chapter books feature BATMAN & ROBIN, the Dynamic Duo. I love all the books in this series. They are great for younger advanced readers or older struggling readings. Not every book in the series is equal. Some are excellent and some are ok but all are gorgeously illustrated by people who have previous credits with DC to their name. 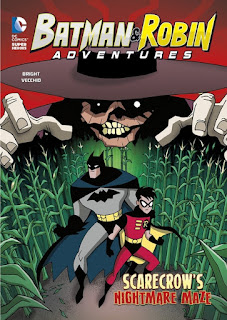 An excellent original story that ties in to Professor Crane's Scarecrow villain with a tale worthy of the characters. The opening chapter is outstanding and will have young readers hooked. The Dynamic Duo go after Scarecrow once he's captured some teens at a Prom Harvest Dance using a new variant of his fear chemicals. The artwork is vibrant and done in the style of animated television. 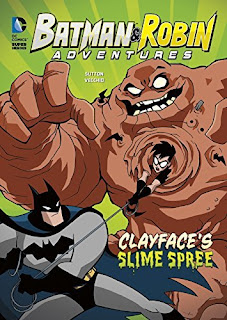 
The artwork is vibrant and done in the style of animated television. The story is directed at younger readers who will appreciate the slim plot that begins an action-packed chase across the city by the Dynamic Duo to arrest Clayface. Caught in action, robbing WayneTech Industries, he's looking for Batman's newest inventions. He escapes when the Duo arrive and they grab a bunch of Prototypes too. Might as well test them in the field ... and no better time? eh? Non-stop action of chasing and being pursued versus using untested prototypes in the field with not many working as they should but many working to our heroes advantage and others to our villain's curses. One thing I did really like about the story was using different devices to capture Clay along the way, heat turned part of him to clay (captured that part) another device turned him into light mud bubbles which they sealed in canisters and finally ... I won't spoil the end with how they capture the last bit of him. Lots of fun for readers who like lots of action.Not one of my favourites, but fun.