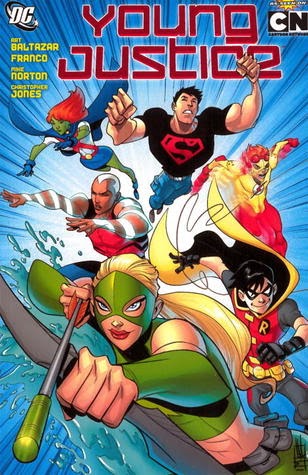 Young Justice Vol. 1 by Art Baltazar
My rating: 4 of 5 stars

I had previously read 2 issues of the comic and greatly enjoyed them so wanted to try the series proper as I'm a Justice League junkie. The JL pops up now and then as the guardians and bosses of Young Justice but mainly they stay out of the picture. This first volume starts off with friends Aqualad, Robin and Kid Flash having just rescued (let loose) Superboy from Cadmus where he was being made as an ultimate weapon. He and Miss Martian also come along and the five teenagers form a covert team that the JL will use on League cases where they think it will make a difference sending in the new YJ instead of themselves. First off Superboy has some time adjusting from the things done to his mind while at Cadmus and has a run in with the Joker (who is drawn like David Bowie from his Ziggy Stardust days. What a look!). Then Kid, Robin and Lad take off by themselves to try to figure out how to work as a team before the whole group training starts. Of course their egos get in the way until they can actually gather some effort to try teamwork. The last issue was great as it gives each character a chance to give themselves a background story as they all sit around a campfire and we learn which person each hero is and what their origin story is compared to DC Canon. Here Kid Flash is Wally West, Robin is Dick Grayson but he had more relatives die in the acrobat "accident" with one surviving in a coma. This is a great all ages kids' comic. Not just for little kids, aimed at older readers with the characters being mid aged teens 14-16, but the material is all ages safe and the story is exciting. It has continuity and a large cast of both heroes and villains. It does feel a bit like if I'd watched the show I'd have been a bit more clued in on things. I just had that feeling I had perhaps missed something and that may well have been something from the show. Otherwise, a top-notch comic for kids, but then that's what I've come to expect when I see Art Baltazar listed as an author!