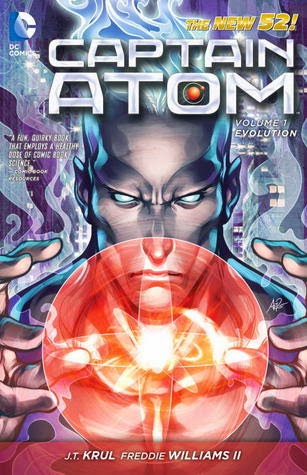 A so-so introduction to the New 52 Captain Atom. The story deals with a few issues but really doesn't have a major plot line. Basically, this is an introduction to Atom, not exactly a complete origin story, though throughout we're given enough info to piece together a good idea of his past. Atom is completely unstable at this point and is doing a lot of soul searching as he tries to understand what he is, the book get's a bit science-y as Atom tries to understand his new nuclear self and of what exactly he is capable. The second half of the book is better as Atom has a team-up with Flash in a brief cameo and Atom ends up battling a monster by book's end. But still through the second half Atom starts to contend with whether he is more weapon or bringer of justice and healing. He also learns he may have to except a solitary life. Not exactly a thrilling story, rather ho-hum, but an introduction that gives a deeper understanding of a superhero who pops up here and there in the New 52 Universe. There is a sequel to this which I will read but wouldn't run out and buy. New 52 readers could easily skip this one, unless you are a completist. (like me, LOL!)