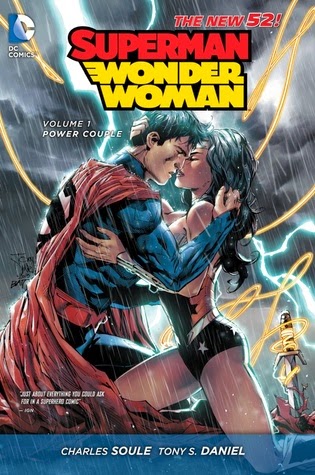 I came into this not quite sure how I'd find. I'm not into Superman or anything Metropolis but I am a Wonder Woman and anything Justice League related fan so I had some good expectations. This presented a top-notch story that was equally owned by Wonder Woman and Superman. It felt like both got their fair share of time and each's world was explored. Diana spends time with her sister, takes Clark to meet some of her God relatives and takes a visit home to the Island. Clark is found at work and surrounded by his Kent-identity friends, a good portion of the story takes place in Metropolis and the overall plot of the book centres on returning villains from Superman's past. I like the dynamics between Diana and Superman and am loving them as a couple, Steve Trevor shows up in a scene with the JL of A which reminds us that his relational aftermath problems with WW were based on his immature behaviour, something not likely to happen if Supe and the Amazon ever call it quits. The plot itself was great; we have two of the strongest superheroes alive and they're confronted with their matches in villains with Doomsday and General Zod along with the plans to open up the gates of the "Phantom Zone", Krypton's prison dimension. Great stuff!