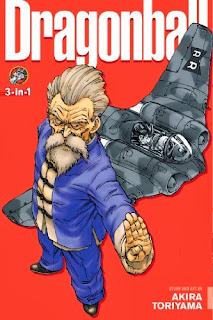 "Son Goku has made it to the Tenka’ichi Budokai, the world’s number-one martial arts tournament, where the competitors vie for the title of “Strongest Under the Heavens.” Goku may have strength on his side, but even the training of martial arts master Kame- Sen’nin hasn’t prepared him for what he’s about to face.

Only seven finalists remain, each with their own special moves. Will the champion be Goku? His fellow student Kuririn? Yamcha, the master of “Fist of the Wolf Fang”? Fighting woman Ran Fuan? Giran, a rubbery monster who’s part dinosaur? Namu, an Indian mystic? Or Jackie Chun, the mysterious old man who may be the toughest fighter of all?"

Vol. 4: Strongest Under the Heavens (1986) - Pure comedy!  Hilarious, with just a teensy bit of girl-ogling. LOL.  Loved this volume which was pure action as Goku and Kuririn participate in the strongest under the heavens competition which of course finished with Goku in the finales.  We are pretty sure he is about to win as this volume ends.  I really enjoyed one of the contestants, a desert peasant named Namu, would be pleased to see him return in a future volume.  (5/5)

Vol. 5 - The Red Ribbon Army (1987) - Another fantastic issue!  The final battle takes some time finishing and the outcome is never clear until the final satisfying round.  Then our gang splits up and Goku is back on the search for his Grandfather's dragonball.  He does find a dragonball but not the one he wanted and comes across more bad guys under the name of the Red Ribbon Army.  Goku promises to rescue the town's mayor from them in the hopes of finding his GF's dragonball.  Goku makes a whole new set of enemies as he head's towards vol. 6! (5/5)

Vol. 6 - Bulma Returns (1987) - So much happens in this volume!  The fight started at the end of last volume is finished.  Goku meets a wonderful new character who resembles Frankenstein.  Just loved him!  And the big "boss" f8ght before rescuing the mayor is pretty cool!  Then comes the new story arc as Goku goes to find Bulma for some help and finally she is back in the story!  We also meet up with Lunch again as she has a brief cameo.  I had totally forgotten about her (she's not even in the character pic at the beginning of the book) and I'd loved her so much!  Great story now anyways as Bulma, Goku and Kuririn set off looking for the next dragonball wile being hunted by the Red Army.  Sequences also shift back to the Old Master on the Island as he is going to be in trouble too and the book ends at a cliff hanging moment.  This volume was a pure rush!  I love these characters!  (5/5)
Labels: 2013 5* fantasy manga viz media