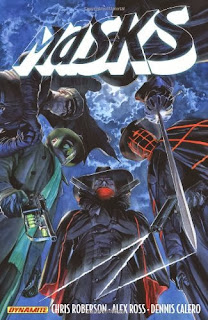 "Before Superheroes, there were Masks! The Shadow. The Green Hornet and Kato. The Spider. In 1938, these masked vigilantes operated outside the law, working independently to
strike fear into the hearts of evildoers. But when the corrupt politicians of the Justice Party transform New York into a fascist state run by mobsters, when an oppressive regime grants jack-booted stormtroopers free rein to imprison, extort, and execute the innocent, when the law itself becomes unjust - justice must be served by outlaws! Outnumbered and outgunned, the legendary vigilantes emerge from the shadows to fight, joined by Zorro, the Green Lama, Miss Fury, Black Terror, and the Black Bat! Nine renowned pulp heroes, brought together for the first time in an epic conflict of Law vs. Justice!".

I love these old-time "superheroes" before powers became part of the deal.  I'm familiar with several of these characters from old b/w movies and serials from I guess the 30s/40s.  I've read vol. 1 of The Spider and loved it, have heard of The Shadow, Green Hornet and Zorro.  The others grouped here are new to me as far as I can remember.  I love superhero team-ups so had a lot of fun with this group though I didn't enjoy it as much as I had expected to.  Unfortunately, with so many heroes there just wasn't enough space to develop any of the characters.  Since The Shadow and Green Hornet/Kato start off in Chapter 1 it is given them the most coverage through the book and I would certainly look into reading Dynamite's "Shadow" series as he totally intrigues.  I've never been a fan of the Hornet or Kato but here Kato was given the starring role with GH always in the background.  I just loved Kato!  Almost everytime he appears he's in the middle of a fight with "karate chop" leg extended about 170 degrees.  All the other characters were gradually introduced until Chapter 6 of 8 we finally have them all and are shown a visual chart with all their names.  The story was realistic being a typical tale of a psycho wanting to take over the world starting with New York City, then Washington DC.  The art was fantastic, especially Alex Ross' first chapter which was almost life-like in portrayal.  Calero did a good job of continuing the style.  I did enjoy this but it is probably going to be more fun for readers familiar with more of the 8 "Masks" than I was.
Labels: 2013 4* dynamite entertainment graphic novel superheroes