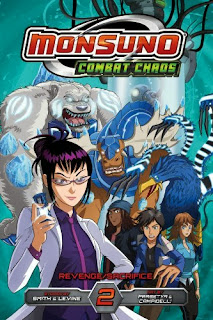 "A traitor in Dr. Moto’s ranks has Chase, Bren, Jinja and Dax in their clutches. Trapped in an underground lab with mutant Monsunos, our team must survive Dr. Moto’s Revenge! Plus, a new fierce battle brings back memories for Beyal about the past and Chase’s missing dad, Jeredy Suno!"

This volume starts of with a list of characters and a "Story So Far' which I always appreciate in my series.  I like Brian Smith but was not too taken with the first in this series though I did decide to give the second volume a shot before making a decision on it.  Unfortunately, again, I just didn't find this interesting or entertaining.  A bunch of battling and the first story seems completely random from the second one.  The second story at least does bring the plot together and the search for Chase's father is now firmly established as the main goal at this point.  Smith wrote the first story then he has passed on the reins, leaving Cory Levine to write the second (and better one).  The series then continues on without Smith as Volume three has again another author.  I much prefer these series when written by one continuous author such as the Voltron series which was very good and would be enjoyed by those interested in this type of book.  I won't be continuing on with Monsuno.
Labels: 2013 3* children manga MG Perfect Square science fiction viz media