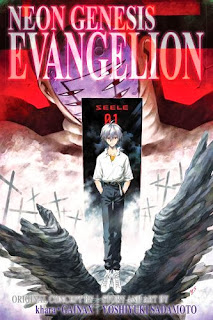 "Once Shinji didn’t care about anything; then he found people to fight for—only to learn that he couldn’t protect them, or keep those he let into his heart from going away. As mankind tilts on the brink of the apocalyptic Third Impact, human feelings are fault lines leading to destruction and just maybe, redemption and rebirth.".

Vol. 10 - I love this series soooo much!  Awesome science fiction!  I could read this whole book in one sitting but I'm going to make myself read one volume a day to make it last ... As we near the end of the series lots of revelations going on, pure adrenaline throughout.  The mystery of Rei is finally revealed.  She is probably my favourite manga character ever  Only thing I didn't like was the small introduction of a bit of homo-eroticism in this volume as the series hasn't been anything like that otherwise. (4/5)

Vol. 11 - Deeper and deeper into the true meaning of it all here.  Tons of biblical allusions, but it is all warped and while based on creation (adam & eve) and resurrection it is all so mixed-up from its roots that it has no allegorical meanings.  Christians will get all the allusions though.  This is the end of the fifth child.  He was just plain weird and I didn't get his role at all (I haven't watched the anime).  Shinji is miserable as he's basically on his own now but behind the scenes people in charge are turning against NERV and Shinji's Dad, while NERV has finally had their fill of Shinji's Dad.  Tons happening, lots of action and character insight as the whole third impact dawns near, or will it be averted?  (4/5)

Vol. 12 - Absolutely amazing!  Asuka is back, kicking butt.  Shinji learns the truth but can he pull himself together to do what is right.  Best moment in the whole book is when Shinji gets a real kiss from an unexpected person.  Loved it!  Death abounds though and there are some sad moments and what a cliffhanging ending!  (5/5)
Labels: 2007 2008 2011 2013 4* manga post-apocalyptic robots science fiction viz media YA