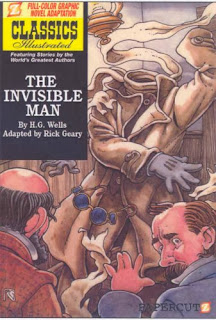 
"One of the most gripping of H.G. Wells’ science-fiction sagas, “The Invisible Man” is the story of a brilliant young scientist who impetuously experiments upon himself, and then becomes invisible and mad, imprisoned in a nightmare of his own making. A spellbinding and unforgettable fantasy, it also provides a lesson in the calamity that can result when knowledge is used toward a corrupt end. Eisner-Award winner Rick Geary’s artwork captures the tragedy and irony of Wells’ fascinating tale."

Borrowed a copy from the library through Inter-Library Loan.

Another fine entry in this series by one of the masters of graphic art! I've always been a fan of this story, though it has been many, many years since I read it. Since then I've seen the movie versions and just recently read another graphic novel adaptation which brought the main ideas of the original come back to the forefront of my mind. Geary here has written a true to the original story, putting uch emphasis on the professor's already shaky state of mind when he arrives at this small village. the plot plays out well for any classic horror tale where the village is slowly incensed and incited to riot, the monster (in this case the unknown, unbelievable invisible man) is forced to flee and in doing so creates even more damage and havoc. The Invisible man here offers no sympathy though; he is a strange youthful scientist who took things way too far and created an invention for the purposes of evil. at which time his own evilness finds it convenient to start showing its own face. Geary's work is wonderful on this one and I actually like the invisible man in colour as it makes him much more visible and real. The conclusion to the chaos ends as it must but is bittersweet with a slightly humorous twist at the end! Wells' works do well when abbreviated for the graphic format. I must go back and re-read some of Wells in the not too distant future.
Labels: 1991 1995 2008 5* classics graphic novel horror MG papercutz science fiction