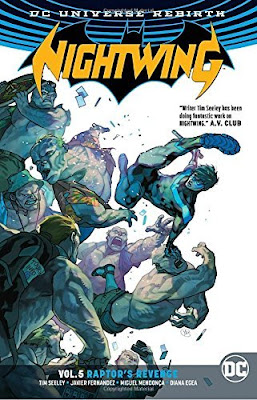 This is a self-contained story which ends on a final note. I thought the story was okay. I'm usually a big fan of Nightwing (Dick Grayson) but not really into him here. The story is simple enough with Raptor out to destroy Bludhaven while Nightwing and various others help him to defeat Raptor. But the story was too political to be any fun for me. Half the people were calling the others capitalists all the time while the other half went on about the poor and "working class". I'm glad Nightwing and Huntress broke up though as I didn't like that relationship; he's back with someone else but I won't be happy until it's him and Batgirl again. lol. Not great but kept my interest.