7. Barrdok the Wanderer & The Legend's Circle #1 by Mike Priebe 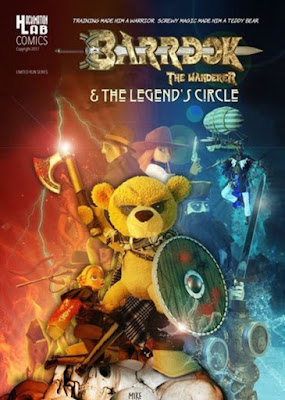 Barrdok the Wanderer & The Legend's Circle #1 by Mike Priebe
My rating: 4 of 5 stars

First I have to say, this is weird, mainly because of the illustration as the story is a combination of familiar tropes. The book starts with a prologue which tells us how Bardok the warrior from a different time and different place enters a portal winding up as a stuffed teddy bear in Wild West America/Victorian London. Then we are introduced to the plot and a gang of heroes similar to The League of Extraordinary Gentlemen, headed by Merlin and containing such legends as Sherlock Holmes and Thumbelina to name a few. Fun story. The art was what threw me as it is strange and I kept trying to figure it out. The characters at times look like photographs of dolls, claymation and those found in rpg games. By the end of the book, I was ok with it though it is kind of ugly at times The back of the book explains the digital mixed-media at forms used. Worth a read if this type of thing interests you.