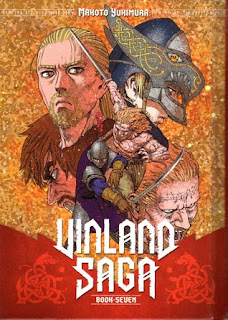 Nothing can compare with this manga series. An epic historical tale of the Vikings. Book Seven sees King Canute's battle and capture of the Ketil Farm as he seeks revenge. This is a fierce, violent, bloody battle. Very realistic historically. This volume brings a brutal death to a beloved character which shocked me. Thorsfinn has been free to escape but he's honour bound to settle his dues with Canute before he does so. Thorsfinn has become such a complicated, mature character now and he's ready to go back to Iceland. But it isn't exactly as he may have imagined returning a full grown man to a home he left when was only six years old now. An emotional and intense volume.