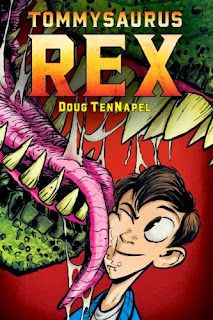 "When Ely's beloved dog, Tommy, is hit by a car, he goes to his grandpa's house for the summer to get his mind off things. While exploring a nearby cave one day he discovers a full-grown but friendly Tyrannosaurus Rex. As the news of the dinosaur grows around town, so does the friendship between Ely and his Jurassic pet. But Randy, the mean kid down the street, decides he's going to make life miserable for Ely and his dinosaur — to devastating effect."

A wonderful heartwarming story that at the core of it all is the story of a boy and his dog ... well, a boy and his pet, even if the "dog" is represented by a Tyranasaurus Rex.  A smaller but equally potent side-theme is the redemption of a bully.  Not dark, like TenNapel's other work I've read to date, but sad and bittersweet.  Tender-hearted children will not be able to handle the Old Yeller type ending (and beginning).  I simply adored this story and found it perfectly suited to the middle-grade age range as opposed to Cardboard which I found better suited to an older age.  However, of interest, which is not to be found on the copyright page at all is that this book was originally written in 2004 and the edition presented here has been colourized and the text slightly edited to make it suitable for children.  The original edition's text may be considered more "adult" or at the least YA appropriate.  Certainly, one of my favourites by the author (Gear being my fav.).  A bit different from his other works: not father/son focused, not as dark (or creepy!), and more touching.  The best of the author's books to start kid's off with though.
Labels: 2004 2013 5* dinosaurs graphic novel graphix MG scholastic