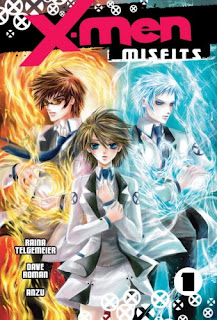 This is a lot of fun and what I guess would be called fanservice. The X-men have been turned into a shoujo manga by Raina Telgemeier and Dave Roman! It's a sweet story too. I'm not much into the X-men but from what memory serves me, this story reimagines Kitty Prydes' first semester at Xavier's School and introduces only a few other X-men, with the climax being Xavier's crippling accident. The book itself is from Del Rey's run at manga publishing, printed American style and the proposed series was cancelled due to Del Rey's abrupt closure of their manga printing house. A cute shoujo for fans of the X-men and a fun look at some early work by the authors who have both gone on to industry-leading work in graphic novels.