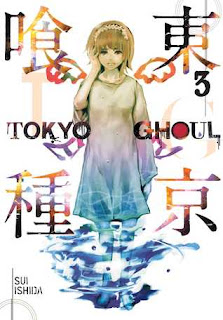 A satisfying volume that concentrates on two ghoul agents tracking down Hinami, Agent Amon and the freaky Agent Mado who is weirder than a ghoul! The ghoul gang tries to throw them off the scent and ends up coming to the rescue (well, sort of). We learn a lot about Hinami in this volume and Kaneki is pushed to his limits in battle when he releases his inner ghoul but doesn't know if he'll be able to tame it back before he has to take a bite of flesh. 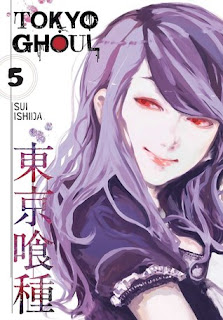 by Sui Ishida
My rating: 5 of 5 stars

Brilliant! I'm reading a couple of horror series right now and this is my favourite one. Rated T+ its got just the right amount of darkness and gore (mostly consisting of decapitations and limb removals) and has a great story line. In fact several are going on at the same time, this volume closes The Gourmet arc and does a lot of character development on Kimi, Touka and especially Nishio taking us on a flashback to his past. We also go on a flashback to learn more about Rize. Meanwhile, the investigators are upping their presence on all the killings going on and Amon is made part of an exclusive team while the book ends with the introduction of a really weird new Special Investigator. This should prove interesting! I have to say I really enjoy reading Viz's Signature line too. These are quality books and I love the slightly larger format.