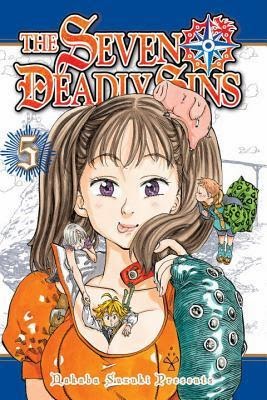 The Seven Deadly Sins 5 by Nakaba Suzuki
My rating: 4 of 5 stars

This is a fun series with lovable characters. I like them all! And I love this cover as it has my favourite, the giantess Diane front and centre. This volume is framed with the new badguys plotting; who we don't know that much about yet except they're some new kind of Holy Knight group. Meanwhile, our gang and the Holy Knights who are after them meet up at a fighting tournament and we are in for a good old battle volume reminiscent of a Dragonball tournament. Numbers are picked and partners chosen, then winners fight in the finals. A good rush of a volume, keeping things light and there is a hilarious element to this story as Diane and Elizabeth are shrunk, but I won't explain that any further. LOL