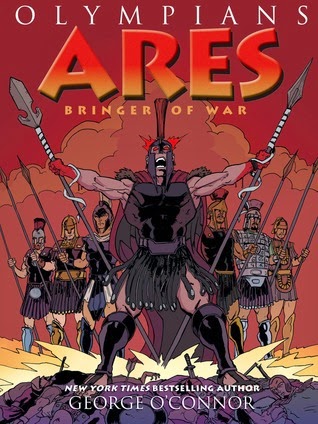 Ares: Bringer of War by George O'Connor
My rating: 5 of 5 stars

Another outstanding volume in George O'Connor's "Olympians" series. Book 7 brings us the story of Ares, the god of war, and the Trojan War. If you've read this far in the series you know what to expect with the artwork and O'Connor brings the same magnificent illustration to the table once again. This story is quite a complex one and brings together all the gods we've met in the other books, plus minor ones who've popped up here and there. They are all assembled watching as the Greeks and Trojans fight their ten-year war after Paris kidnaps Helen. The book doesn't just focus on Ares but rather contrasts Ares with Athena, the goddess of war, giving both of them about equal page time. Achilles' story and important role in the Trojan War are also part of the main plot. Other topics explored are all the various gods/esses relationships with their mortal sons and how the gods/esses intervened during the war, taking sides and arguing amongst themselves, playing with the participants during the first years. A wonderful addition to this ongoing series.