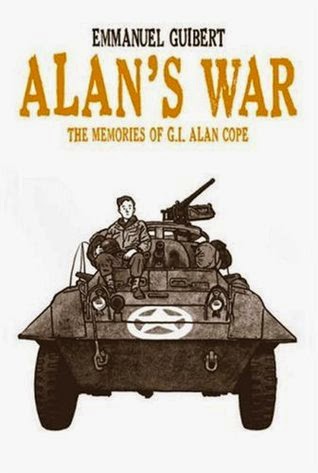 Alan's War: The Memories of G.I. Alan Cope by Emmanuel Guibert My rating: 4 of 5 stars

This is the story of one man's war. It is not the story of WWII, but the story of one man (Alan Cope) and his personal day to day life as he lived through those years in France. Alan didn't fight in any famous battles or according to himself, show any acts of bravery. His war could be called mundane, but no one can go through fighting and surviving a world war without having tales to tell and these are Alan's tales in his own words illustrated by Emmanuel Guibert. The book was good and I enjoyed my time with it. There are a few things that made it not a five-star read for me. It drags a bit, being overly long. Guibert doesn't do as much of his photograph/illustration mixture artwork for a good portion of the book, which I can understand because of the lack of photos taken during the actual combat years, but still I felt their absence. Finally, I simply didn't like Alan. I had a small inking after reading the story of his childhood that as an adult he might rub me the wrong way, and this book certainly confirmed that. I didn't like his worldview, outlook, or opinions. So that does take away from the enjoyment of reading the minutia of his life. But all told I did like this quiet, personal look at one man's war.