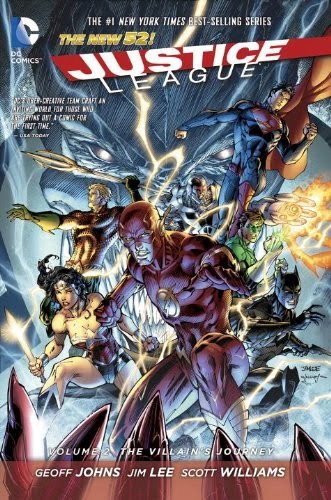 "• Now that the team’s origin story is complete, we shift to the present-day Justice League! What has changed? Who has joined the team since? And why does Green Arrow want to join those ranks so badly?

• Plus, someone is out to get the Justice League, and he is determined to show the world how mortal these godlike beings really are!

This is a reread for me and you can read my original review here.  So this time I noticed I was picking up on lots of things that were (or are going to be) a part of the larger picture regarding future events.  SPOILER ALERT ahead.  Etta Candy arrives on the scene.  Batman & Wonder Woman tell Steve to close down the embarrassment called Justice League International. The Green Arrow shows up, tries to prove to the JL members he belongs in the group but they spurn him, then Steve Trevor takes him aside and says "forget it, man.  I've got another group I want you for."  What group will that be?  No more GA this issue.  The Talons make a brief appearance so we know the Court of Owls is still out there somewhere. There's a brief flash to Martian Manhunter and we are teased with what broke up their relationship with him. Aquaman is being given the usual harassment by reporters when someone suggests Vibe is a better hero than him.  We haven't met Vibe yet.  Green Lantern quits.  Discussion for a possible new leader (other than Batman) is entertained. And Aquaman's Atlantean army/team The Others are referred to as well.  Amanda Waller arrives on the scene.  Finally we return to an epilogue started in Vol.1: Origins that moves the strange tale of Pandora forward a little bit.  Every bit as good the second time around and I love how all the books to date are meshing together.  I'm reading all the JL's (JL, JLI, JLD, JLA, etc) in published order. 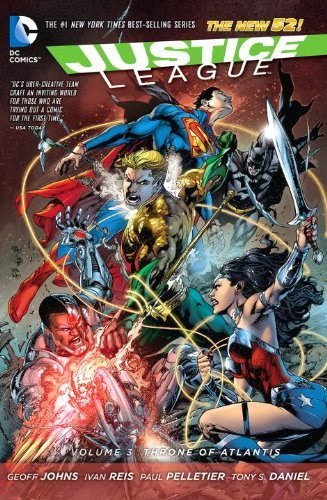 "When Atlantis is struck by a U.S. Naval missile gone awry, Atlantis--led by Aquaman's brother Ocean Master--attacks the East Coast of the United States flooding its major cities such as Boston, Metropolis, Gotham City and several others.

The Justice League comes together to help Aquaman turn back the tide, but they soon learn that they are woefully overmatched by the Atlantean Army, and must find a way to save the world from total annihilation.

This series just keeps getting better and better.  Volume 3 collects issues 13-17, along with two issues if Aquaman, 15, 16.  The volume starts off awesomely with a fight between The Cheetah and Wonder Woman, then a whole story gets played out as the League joins WW in capturing Cheetah to stop her mayhem while at the same time they learn the truth behind Cheetah's background.  Great beginning!  Then we get to the main story where Gotham is attacked by huge tidal waves and floods.  Some guy from Atlantis shows up looking for "King Arthur" and tells him Orm is attacking.  Without going into further details a whole battle ensues between the League and Orm, Arthur and Orm and even to a degree Aquaman and the League.  The absolute coolest part though is that half-way through when things are just too much for JL, Cyborg calls in the reinforcements!  A secret group of superheroes who were on a list to be considered for filling in the available spot.  But they all come together and join the fight!  So we have 10 unexpected superheroes who show up.  Loved this!!!  Also very fine ending that has the Trench guys from Aquaman Vol. 1 showing up, we just knew they would show up again didn't we? and a final showdown between Orm and Arthur for kingship of Atlantis.  Finishing off with a curious epilogue which appears to show three new groups in the formation: Steve Trevor's new group (JLA?), JL opening up membership, and a league of villains?  Cannot wait for the next issue!!! This is fantastic stuff.  BTW, the art is top notch as well. 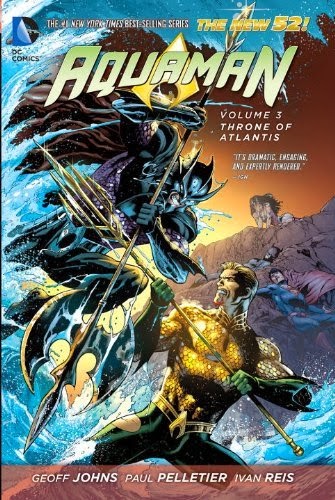 "Aquaman, who long ago lost contact with his people, must watch as armies emerge from the sea to attack the surface world. The Justice League answers the call to defend the shores from the invading Atlantean horde. But whose side is Aquaman on? With his brother Orm at the head of the undersea army, will Aquaman stand with his Earth-bound super team or his own people? Find out in this exciting title collecting AQUAMAN #0 and 14-16 and JUSTICE LEAGUE #15-17"

Borrowed a copy from the local library.

Volume 3 collects issues #0, #14-16, along with three issues of  Justice League.  What that means for me and any other collector/reader of both series is that the only new material in the book is the first two issues #0 and #14; the rest of it is repeat material  from The Justice League Vol. 3.  Fortunately for me, I am buying the JL volumes and using the library for AQM, otherwise I would have been pretty annoyed at spending money on this heavy duplication published merely weeks apart from each other.  Publisher's greed aside, I can't fault the actual book with any of this, so have only lowered my rating to a 4 because of the need for a person to be informed of this and to possibly make the decision which of the two volumes to buy .

#0 & #14 were great additions to the story for me as it explained the whole why of what happens in Justice League Vol. 3.  First we go back into Arthur's past at the time when his father dies and we learn his reluctance to ever enter the water until his father gives him his dying wish.  In my JL3 review I mentioned "some guy" who pops up and here we get his and Arthur's background with each other, so when he does pop up later we know who he actually is.  We also learn the past history of Orm, how he became Aurthur's little brother, what happened to their mother, the feelings between the two brothers and it all sets the stage for the final issues which I talk about in my review of Justice League Vol 3: Throne of Atlantis.  I really truly love Aquaman and at this point may just start buying trades.  DC could have done better to publish one book instead called something like "Justice League & Aquaman Present Vol. 3: Throne of Atlantis" which would have filled the Vol. 3 spot for both AQM and JL.
Labels: 2013 4* 5* DC Comics graphic novel superheroes