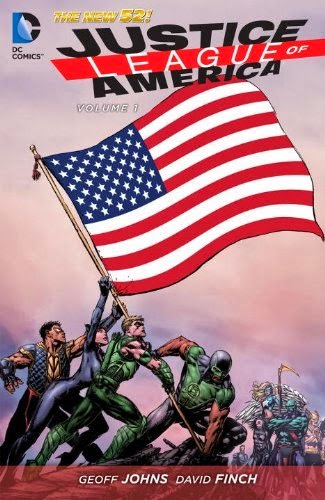 "Green Lantern! Green Arrow! Catwoman! Katana! Vibe! Hawkman! Stargirl! They aren’t the world’s greatest Super Heroes—they’re the most dangerous! But why does a team like the JLA need to exist? What is their ultimate mission? And who is pulling the strings? Find out in this collection of the first five issues of the new series as the team takes on the Secret Society of Super-Villains!"

Pounding heart. Palpitations. Justice League, what is happening? Where is Booster? How many Justice Leagues will there be?  Will even one be left standing?  My mind is racing after reading this volume and I. Can't. Wait. For. Trinity War.  I pre-ordered it ages ago!! There are so many superheroes involved in this book that it is just too many to even remember who is supposed to be part of the new JLA.  The first line-up gets changed once and at the end we don't know where they stand.  Just like all the other JLs at this point!  Shazam is even here.  He was on the reserve list from Justice League, Vol. 3 and he's still hanging around and wants to go home but is told he'd better stay around until things get sorted out.  The scenes with various JL's going up against each other are truly epic!  And now we have a Secret Society of super villains.  Catwoman which team is she on?  Amanda Waller where does her loyalty lie?  The answers will psyche you out!!  OK, now just some rambling.  Lots of new people here for me.  I love Vibe!! What can I say ... I thought he'd be lame but I love him.  We get to know a lot about Green Arrow actually, even though this volume is not much about the characters as it's so intense on the action.  I haven't liked his appearances so far in the JL books but I'm willing to look into him now and may try out his series.  Martian Manhunter is given quite a bit of character development too and I think that's because he's being seen as the "leader" of JLA.  I loved the slightly different twist on his background story than pre-52 and I've always liked him as a character.  None of the other new superheroes was given enough exposure to get to know them yet so am reserving judgement.  Yet I can say I love, love, love the Leaguers and their universe!!
Labels: 2013 5* DC Comics graphic novel superheroes