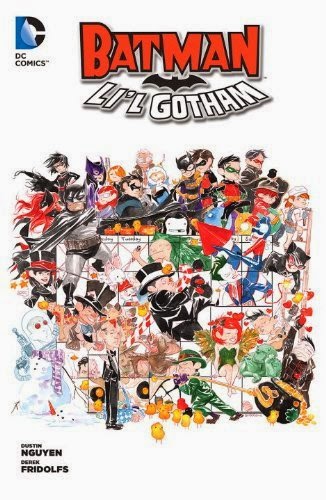 What the heck did I just read??!  I *thought* I was going to be reading a Batman aimed at little kids but then as I started reading I decided, no, this is a parody of Batman, aimed at adults, that kids could read but wouldn't get the adult jokes.  But after a while I just gave up on trying to guess what it was.  The only thing I truly knew was that it wasn't for me.  Not funny, when it was obviously trying to be.  Damian came off as a super-jerk.  Mr. Freeze's "heartfelt" Christmas scene gave me the creeps and had overtures of John Wayne Gacy.  The art, sploshy, unclear watercolour painting was just not nice to look st for a total of 128 pages in a row.  A collection of little stories, each based on a holiday, all the ones you'd expect plus a few others such as Chinese New Year and Cinco de Mayo, had odd tales to tell with a huge cast of the Bat Family and all their regular villains make appearances.  All the characters are portrayed as pint-size, child-like, yet not as children, I guess reflecting the title "Li'l" and the continuity is before the current New 52 universe. It tries, but not too hard.  If there's a point to all this I missed it.
Labels: 2* 2014 Batman children DC Comics graphic novel superheroes