259. Children of the Sea Vol. 5 by Daisuke Igarashi 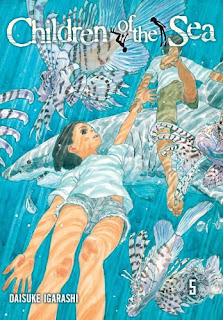 "After following Umi deep into the ocean, Ruka finds herself in an undersea cave where she hears a voice calling to her. She soon realizes it is the meteorite in her stomach, telling her the next step in her journey. The FINAL VOLUME of this majestic tale."


Finally the conclusion to the "Children of the Sea".  Having waited three years between publication of volumes 4 and 5, I decided to re-read the first four before diving into this one and I am so glad that I did.  This manga is classified as seinen, aimed at an under 40's male audience and contains a very deep metaphysical, existential plot that I think the author allows the reader to put their own meaning and deeper understanding into.  I found this last volume absolutely fascinating and rewarding.  I'm not going to say anything that happens so this may all sound mysterious to those who don't know what I'm talking about.  The story ends as it begins with the woman on the boat talking to the boy and I'm not going to say who they are but this is important to remember from book one.  I had talked about the importance of birth in the last volume and hoped this one would culminate in that theme and boy does it ever!  The ocean is compared to the womb and I found the whole story when given this ending to be incredibly pro-life!  I'd like to re-read the whole thing again in a few years with that theme in mind as I read.  This volume contains a lot, and I do mean a lot, of wordless panels so we get to experience the full glory of Igarashi's intricate, awesome artwork of marine life.  Nothing is spelled out for you in this series though, so it isn't gong to be to everyones tastes.  But it sure is to mine and this series will stay on my shelves permanently.
Labels: 2013 5* fantasy manga seinin T+ viz media