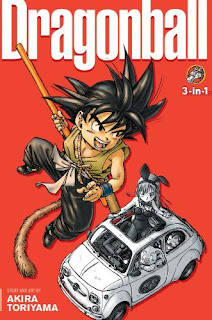 "Legend has it that if all seven of the precious orbs called “Dragon Balls” are gathered together, an incredibly powerful dragon god will appear to grant one wish. Unfortunately, the orbs are scattered across the world, making them extremely difficult to collect. Enter 16-year-old Bulma, a scientific genius who has constructed a radar to detect the exact locations of the Dragon Balls. She’s on a mission to find all seven orbs, but first she must convince young Son Goku to join her on her quest. With a monkey tail, superhuman strength and a magic staff for a weapon, Son Goku is ready to set out on the adventure of a lifetime…"

Vol. 1: The Monkey King (1985) - I know absolutely nothing about Dragonball going into this.  Since I read so much manga now I thought it would be good to introduce myself to some old school popular series and decided to give this a shot.  I found this first volume absolutely hilarious and such a fun, compelling story with so much happening.  Goku is so cute and naive that I loved him right away and the shots of him without his pants on are a riot because he looks like a toddler, even though he is 14 but soo unworldly.  The interaction between him and Bulma is also a riot as he learns the difference between boys and girls.  Lots of sexual innuendo but of the pre-adolescent variety that is was all just silly fun.  The plot was also fun with all 5 main characters being introduced in this volume and them finding 5 (I think) of the 7 dragonballs.  I had no idea what the plot was going to be going into this and was quite amused to get almost a whole quest just from this first volume.  I have to say I did not expect to enjoy this as much as I did and am eager to read Vol. 2!  (5/5)

Vol. 2: Wish Upon a Dragon (1986) - Just what I had hoped for, more of the same.  Lots of action, plenty of plot and characters.  A few new ones are added who seem to be the type we'll see again in the future.  The final dragonballs are found ending our first quest.  However that doesn't mean all goes quite as planned leaving only one person pleased when all is said and done.  Now they must wait a year for the dragonballs to be ready again so they can search them out and everyone has their own ideas and plans for what they will do.  As for Goku, he is off to find The Invincible Old Master to finally start his promised training but he has to bring a treat for the old "pervert".  Just as laugh out loud funny and I really enjoy all the main characters but especially Goku and Bulma.  The monsters battled to date have all turned out to be quite interesting themselves as well. One more volume to go in this fun collection.  (5/5)

Vol. 3: The Training of Kame Sen'in (1986) - Things turn more serious in this volume.  But first off the story is light and humorous as Goku searches for a "hottie" for his master.  Two new characters are introduced at this point: Kuririn, a fellow apprentice wanting to train with the master and Lunch, a sweet girl who changes personalities when she sneezes.  Absolutely love Lunch!!  After this fun, the training starts and though of course the book is always full of humour and LOL moments the plot turns serious as they train and the master gives them "Karate Kid" philosophy.  By the end they are in the big competition, Tenka'ichi Budokai.  There will be six matches with the final two contestants fighting for the championship.  The book ends with Goku going against a very gross opponent in the first match.  This is totally different from any other manga I've read but I have to say I really enjoyed it.  It is full of young male adolescent sexual humour which usually isn't my thing but the characters are so fun and cute I couldn't help but just laugh along.  I'm so glad I stepped out of my comfort zone and gave this a whirl.  I'm hooked and can't wait for the next volume! (4/5)
Labels: 1984 2013 fantasy humour manga MG viz media YA