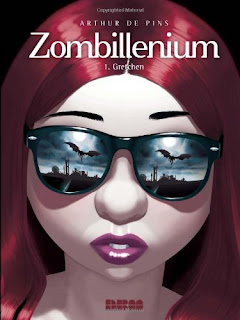 "Francis von Bloodt, vampire, a good family man, manages the theme park Zombillenium. They don't just hire anyone, at Zombillenium: mere mortals need not apply, the park works only with genuine werewolves, vampires and zombies. This is what Aurelian gets to discover as, burnt out, deceived by his wife, he finally gets hired in spite of himself in this strange business. Gretchen, a plucky trainee witch, helps him get around..."

The first English translation of de Pins Zombillenium series comes to us with book one entitled Gretchen.  Gretchen is a witch who works at the above mentioned theme park.  I wouldn't call her the main character of this book, as she shares the spotlight equally with a number of others, but she does become the most interesting by the book's tantalizing ending.  The art is bold and sleek.  The humour is light, yet dark and this is a comedy just as much as it is a paranormal tale.  I immediately fell in love with all the characters met in this volume: Aton, the mummy, who no one is afraid of because they just think he's a guy in costume; Sirius, the skeleton, who in life was a black civil rights activist dying in the South in the 60s (intriguing that this character has been stripped of his colour but not his identity); Francis, the vampire, the in-charge, no nonsense owner of the park who looks after his workers and treats them like a big family and finally Aurelian, a man who gets run over along the way and some argument arises over whether he'll be a werewolf or vampire and he ends up being, well, something else.  This is the one ambiguous character at this time.  He would appear to be the most innocent of them all but he turns out not to be.  Put a grin on your face wit, laugh out loud humour, great characterizations and an intriguing plot set-up have me waiting for book two.  The only problem with the book is that at 48 pages, it is waaay too short!
Labels: 2013 4* fantasy graphic novel horror NBM vampires werewolves zombies