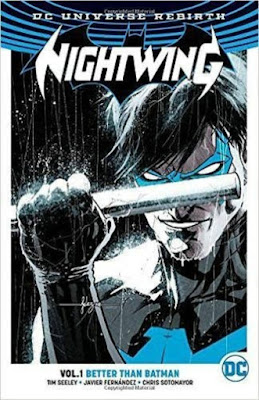 Nightwing (Rebirth) Volume 1: Better Than Batman by Tim Seeley
My rating: 4 of 5 stars

I read both the "Monster Men" crossover and Nightwing Vol. 2 before I'd read this so had to play catch up. I wasn't too impressed with Vol. 2 and really wasn't into the art. However Vol. 1 has a different artist and Nightwing looks good and so does everyone else except Batgirl who looks about 15. Then they put Nightwing, who is in his early 30s, with Batgirl and it looks pretty pervy them having a relationship. Anyway, the story is great. It has some constant references to the Monster Men prepping you for the crossover and I was thrilled that the Owls were back. They were my favourite story in the New 52. But now the Owls are after Nightwing and he teams up with a Robin Hood type of vigilante who may possibly be a double agent, to get to both the Owls and Kobra. The story is complete in itself with a great ending.