All Star Comics #62: When Fall the Mighty by Gerry Conway 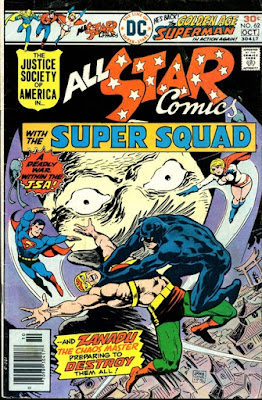 All Star Comics #62: When Fall the Mighty by Gerry Conway
My Rating: 4 of 5

This is my first time going into an old pre-80s comic since I started reading them again about 5 years ago. This was totally awesome! I'm a bit surprised at how much I enjoyed it. The plotting was very good and there are several minor threads running alongside the major arc. The book starts in the middle of the action with Dr Fate lying at death's door from whatever happened the last issue. This is also Power Girl's first story, with her first appearance happening only 5 issues previously in #58. The JSA are all elderly now with greying hair and include Superman, Hawkman, Green Lantern and others, while the new kids on the block, The Super Squad, seem to be a precursor to the Teen Titans. This group includes Power Girl, Star Spangled Kid and Wildcat. The latter being new to me. I love team-ups and this book brings old friends and new characters together seamlessly. A lot of fun!
Labels: comic book DC Comics Gerry Conway Paul Levitz superheroes