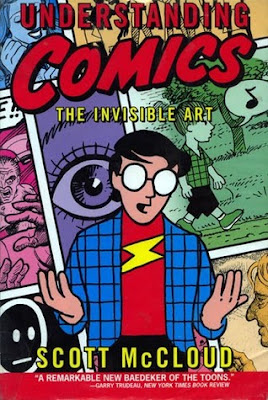 by Scott McCloud
My rating: 5 of 5 stars

I could spend a long time writing about this book and telling you what the book is actually about and what is included, but that is not my purpose. Rather I'm here to tell you whether the book is worth reading. What the book is about is self-explanatory as the title says it all in very plain language. Written in 1992, I had wondered whether this much-lauded book was worth reading as I thought it might be out-dated and irrelevant by this time. It is certainly worth reading and probably required reading for anyone who considers themselves more than just a casual comics reader. It is outdated in some parts when the author talks about comics in the present and future as that was twenty-five years ago and during that time comics have come a long way as McCloud predicts they might. The outdated parts are immaterial though as much of the book is about the history, appreciation, comprehension and techniques of comics. (both the writing and reading of). One thing I really enjoyed was that the author takes into account the difference between North American/European comics and Japan. Japanese comics evolved in a totally different manner due to their isolation for many years, but at the time of writing the Western world was just starting to employ some of the Asian techniques and now, of course, manga is translated into English (and other languages) and widely read throughout the world. At first I thought the book could do with a second edition updating the nineties content and continuing the story to modern times but I have since found that Mr McCloud has written two more books on this topic, one in 2000 and the other in 2006, which I assume will fill that hole and I'm quite anxious to read them now. Understanding Comics is a must-read for anyone even slightly serious about comics.