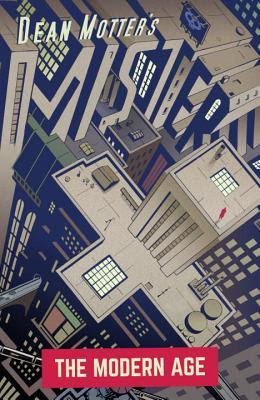 by Dean Motter
My rating: 4/5 stars

A fantastic omnibus of the latter stories of Mr. X by Dean Motter. An ingenious world this is, a city affected by architecture. The world is 1940s-ish, a bit steampunk with zeppelins and monorails in the air; it's definitely a future world but the art is awesome Art Nouveau in style. My favourite character throughout the book was a secondary one, Mercedes. Great read, not to be missed and this makes me want to read the earlier incarnations of Mr X.

1. Condemned - A really strange city where the architecture had been mixed with psychic stuff that eventually drove all the residents insane. Now the government, with an election coming, is trying to rebuild, urban renewal. There are a few angles going on here: the mafia, a secret society of architects, a serial killer, and government corruption. Although hard to describe it's a crime/mystery plot that I quite enjoyed. Mr. X is trying to fix the architecture and Rosey Stone is a reporter who secretly works with him. The art is gorgeous! It's very Art Nouveau in style. Futuristic sci-fi with a 30/40s look. (5/5)

2. Yacht on the Styx - A short story featuring X and Rosey. A man's body is found in the cornerstone of his own building. How could he have gotten there when he was publically active for many more years to come. (3/5)

3. The Vanishing Breed - Takes place one year after "Condemned" and is a short two-parter. This is about the drug poltercaine which turns you into a phantom. The former mayor is addicted to the stuff and a friend gives it to Mr. X when he gets held up in jail. (4/5)

4. Eviction - Mercedes has been taken by the Ganeral Assembly and is placed in Purgatorium (jail) as she won't give up any info on Mr. X. Rosey gets a new cameraman, an orphan, since Scooter is in the Asylum dealing with his addictions. Meanwhile X and Rosey work on getting Mercedes out while at the same time bringing down the Assembly. A lot of stuff happens in this one and it's a complicated story with reference to previous stories and lots of pop culture. (4/5)

5, Hard Candy - The big pharmaceutical company that used to make all the illicit drugs has their young heiress kidnapped. When a ransom note arrives saying they must restart production and sell only to the kidnappers the owner hires Mr. X to get her granddaughter back. (4/5)

6. Frozen Assets - This one was a lot of fun. Bad guys unfreeze a cryogenic head of a crook who hid all his money. Stories with talking heads floating in jars are always fun. Turns out this guy stole a lot of money from Mr. X (4/5)

7. The Eaves of Destruction - A short Christmas story where Rosey's Rabbi father comes to visit while she is working on a series of Rabbi serial killings. Really liked this one, and the red in the art was gorgeous. (5/5)

8. Dead Giveaway - Another short Christmas story set in the same area as the previous one but starring secondary characters. A man and his trophy wife are trying to kill each other for Christmas. (3/5)

9. Razed Expectations - The best story in the book and the longest. Takes place a few months after "Eviction". The election for a Mayor is back on and all the candidates have schemes going. The story is broken up for a few issues of Rosey investigating a zombie precious metals theft ring, which sounds insane but was really good. Everything wraps up at the end of the urrent arc but there are tons of things left wide open. (5/5)

10. Mr. X in Slumberland - Just a kind of advertising short explaining the history of the 9th Architects and how Mr. X is back. (NR)

11. The Return of Mr. X - Some pages from the first issue worked on with Paul Rivoche which was never published. (NR)