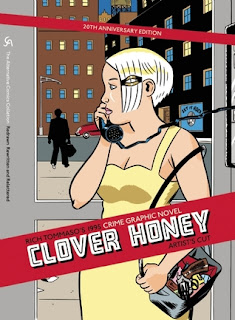 by Rich Tommaso
My rating: 4 of 5 stars

The story starts off as a crime involving younger members of an Italian mob family but this is really just the background. What the story explores is the family dynamics within this "dysfunctional" lifestyle. Abbie starts off as a secretary with "Uncle" Gary until she proves herself and becomes the enforcer she's always wanted to be. She's partnered with a cousin who ends up ripping off the Family. Things are not exactly what they seem but Abbie becomes deeper and deeper enmeshed in the life, while still having a naivete about the meaning of "family". We meet another youngster, Patty, who lead a life of drugs and has finally got her stuff together raising a new little baby. Here, it is all the Family who shows up at her place and helps her to turn herself around. Abbie loves the family but also starts to realise no family blood is stronger than the interests of the Family business. She spirals down and seeks retribution in the end. I love mafia stories and this held my attention throughout. Even though Abbie isn't exactly a likeable character one can sympathise with her as she's a well-defined character. The art is very good for b/w ink drawings. The author has given the book a complete makeover from its 1995 release, bringing the first half of the art to match the second half and he talks about the change he made in the lettering and why. I enjoyed this and would read the author again.