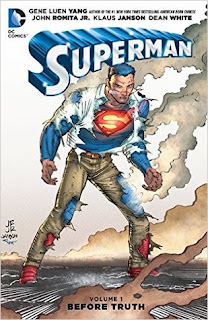 by Gene Luen Yang
My rating: 3 of 5 stars

I was really excited when I heard Gene Luen Yang was taking the reins on a Superman story as he's one of my favourite graphic novelists. Yang is a great writer and he's written a good story here with lots of character and well-plotted and I enjoyed it but ultimately I wasn't thrilled as it just wasn't very exciting. The villain has been created specifically for this story arc and he's not what I like in villains. He's just a high-tech guy blackmailing people. Other villains who show up are lame, lesser known names from the past such as the Royal Flush Gang. There are some good action scenes with Supe using his new EMP 'solar flare' power but no great battle scenes which are what I want from my superhero comics. So, some disappointment on my part but I'm willing to tune in for volume 2 as there are hints that something more exciting may happen. This villain mentions a father he's seeking to prove himself to near the end of the book and I'm hoping that will turn out to be a more spectacular and exciting supervillain.