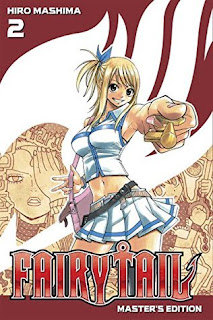 This is just one of the best fantasy series out there and the omnibus editions are gorgeous and huge! I love the magazine size presentation which though making them hefty tomes also makes them a pure delight to read. Volume 2 Master's Edition contains Vol. 6 to 10 of the original series and covers a lot of story. I won't go into much detail so as not to spoil the plot but after finishing off the storyline from where things were left in vol. 5 a new story arc is started and completed within this edition involving an all out war between the Fairy Tail Guild and the Phantom Lord Guild. Natso finally meets another dragon slayer and three characters get storylines of their own giving us backgrounds on them and lots of character development: Lucy, Loki and Erza. Tons of battle action, some pretty dark storylines and of course plenty of humour and silliness. This is a very full book and even though you are binge reading 5 volumes in a row it took me several days to read the whole thing since there was so much coming at me; I needed to savour it all and not just gobble it up. So excited waiting for the next volume.