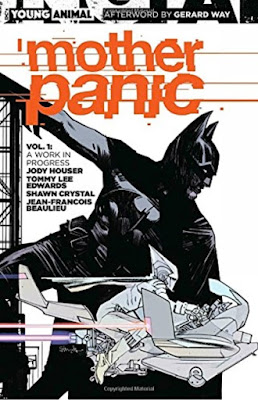 This is the second release from DC's new imprint "Young Animal". Described as between DCU and Vertigo, Mother Panic would actually be right at home in the Vertigo line too. Victoria Paige is a celebutante and a wicked vigilante. Her role is a female, 21st-century version of Batman and she is indeed also part of Batman's world as she has come to seek her own form of justice in his city, Gotham. Batman and Batwoman both show up briefly to keep an eye on this new suit. It's a very dark and strange story. I didn't have a clue exactly what was going on all the time and the characters are all new but the dark, gritty, violent atmosphere kept me interested and I'm ready to explore this new anti-hero further but would especially like it to keep up the cross-over into the Bat Family's world.