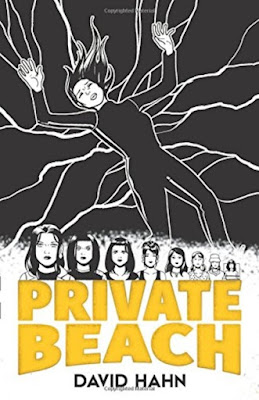 by David Hahn
Foreword by Jeff Parker
My rating: 5 of 5 stars

A brilliant, totally engaging story. Three twenty-somethings, two of whom are sisters, and their male sidekick go through life until a fantastical twist ending takes the story beyond the realms of realistic fiction. Set up in chapters which could stand-alone as shorts they are eventually all connected and tell a slice-of-life tale. These girls are very quirky characters and 100% not politically correct in their topics of conversation. They do and say surprising things which a reader has to admit that they've thought or said themselves at some time. There are also very poignant parts which give the story depth such as a day in the life of the sister who is a nurse and a visit to a male friend who received a large insurance settlement from some unknown event which led to the loss of one leg. Trudy is the main character and the overreaching arc concerns her and the fact that she is one of these people who strange, ironic or coincidental events happens to all the time. The seven original issues are fantastic though they end abruptly. While the new final chapter takes the story to a bizarre conclusion. I fell in love with the characters right away and highly enjoyed this unusual story.